Announcing the formation of the Professional Hickory Golfers Association.

It probably started as a whim, people collecting ancient golf clubs as they would fine art. The implements with shafts made from wood and carrying crazy names like niblick and mashie have long ago been discarded. Suddenly golfers saw value in the hand crafted tools of a bygone era. Then somebody swung one at a ball and memories of youth sprang forth. That was cool he thought, and then a round at the local links was called for. Others saw and wanted to try and in time a society of enthusiastic players evolved. Maybe a better choice of words would be a game was reborn. Golf played with wood shafted clubs over grounds a century old or more.

Here in 2011, there are groups all over the world playing what we affectionately call hickory golf. There are tournaments every month somewhere. There is even a Ryder Cup version of old time golf hotly contested among Europeans and Americans. Those of us who play appreciate the simplicity of the game and value of keeping a link to the history of its origins. With all the advances in golf over the years, it seems like the industry spends less and less time celebrating our roots. There is no reason that golf can’t forge ahead and promote its beginnings at the same time. Golf lends itself to both modern play and that of antiquity. 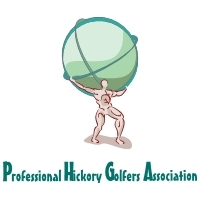 With that in mind Mike Stevens, current American Hickory Champion, has called on several professional friends to form the Professional Hickory Golfers Association. What better way than to have the men and women who teach and play the game for a living pass on our history by actually playing the game of our ancestors. There was a hit movie entitled, “Back to the Future.” The PHGA motto will be “The Future is Back”, and urge all pros to come along. We don’t expect abandonment of the modern game, but would hope that an occasional round in some hickory events will become a part of the professional life.

There are two chapters of the PHGA – North America and Europe. The North America Chapter has established the United States Professional Hickory Championship which is played in Temple Terrace, Florida during the month of February. A European Championship is being planned for 2012 and a World Championship in 2013. Mike Stevens and Kody Kirchoff are the Directors in North America while Klas Ohlsson and Owe Werner will direct the European Chapter. Special advisors are Adam Mednick, Pierre Fulke and Lionel Freedman.

The Professional Hickory Golfers Association is a dues free organization open to any male or female golf professional. There are two chapters – North America and Europe. We currently have 35 members.

For more information on joining go to the website at www.prohickorygolfers.com.